Discover the Secrets of Desert Simplicity

Last week I joined a full moon trip at the desert level, one of the special experiences that the Dead Sea Land can offer anyone who chooses to see the constraints of Corona as an opportunity to expand borders. The concept of full moon trips at the desert level was conceived several years ago by Asaf Hershtig – a tour guide and desert man. Asaf, a resident of Mitzpe Shalem, felt that “in the Dead Sea you live in the most amazing landscape in the world, but the cliff closes in on you. Once you go ‘upstairs’, you have wide open spaces to move around in and, in my soul, I need the openness, the space, the wandering.” That’s how Asaf began his love affair with the Desert Heights, focusing specifically on an area that begins in “Metzoke Dragot” and continues west. Asaf has turned the desert level into a “playground” where he conducts field activities such as parent’s and children’s workshops, and full moon trips for the best at/lovers of, walking and wandering.

Tours usually take place during the winter while, in summer, Asaf guides tours abroad but, this year, the Corona has kept him in the country. Asaf was joined by Omer Ziv, a tour guide himself and director of the traveller’s club – Let’s Walk – Hiking Israel – a hiking club for serious walkers.

The desert level is an area in the Judean Desert that stretches from the “Haetekim Cliff” in the east, to the desert frontier in the west. The full moon trips take place in Asaf’s “playground”, which begins in the “Metzoke Dragot” area and stretches west. 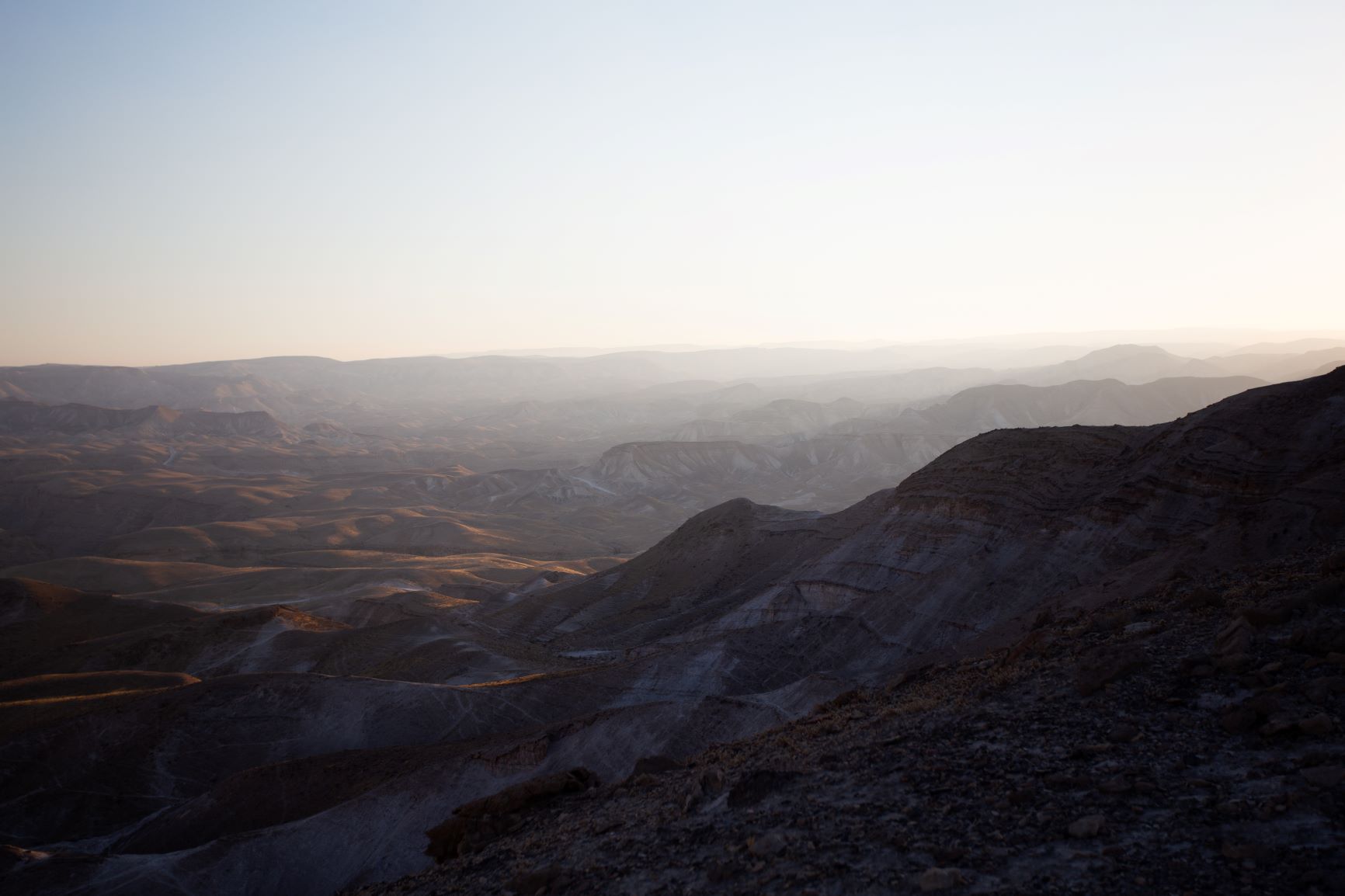 The trip’s preparation and set-off point is near the “Metzoke Dragot” village – the group’s hikers arrived independently and parked near the gate. We began walking west on the road leading out of “Metzoke Dragot” towards the Judean Desert. After 5 minutes of walking, we left the trail and went into the desert that quickly swallowed us up. We entered a stream-bed and when “Metzoke Dragot” disappeared from view, we sat down in a circle for our first stop. Asaf picked up a stone, to which a butterfly cocoon was stuck, and showed us the remarkably intricate and exquisite seed-distribution system of the dwarf star plant. It looks like a simple dry flower, but when you water it, it opens up and discharges its seeds. Without too many explanations, one realizes that the desert is pulsating with life, and with the possibility of life, but the signs that attest to it are remarkably subtle.

Moving on to the rough part of the trip – climbing “Katef Tor” (the shoulder of Mount Tor) – a low mountain that dominates its surroundings. Your pulse begins to increase and you start to sweat, but the goal is to reach the vantage point in time for the sunset. After a relatively short but strenuous climb, you reach the top. We wait for sunset and, meanwhile, Asaf explains about the area from a geographical point of view, and gives the contexts of the Judean Desert in relation to the desert frontier, to the west of us – and you can even see the Herodion (King Herod’s Tomb & Castle). After Asaf, Omar Ziv sits down in front of the group and elaborates on the meaning of the desert in our culture, and the lifestyle that characterized its ancient inhabitants. With a special link to this week’s Torah Portion, dealing with Moses and the spiritual transformation he underwent during 40 years in the desert, you realize that modesty walks with you in these wide open spaces, and it touches you – especially given the landscape that is just beginning to wear its sunset tones. The final sentence of this conversation, ends with us and how we should learn modesty from the desert. Omar and Asaf were not only talking about modesty in relation to us carrying all our own equipment for the trip on our backs, without the convenience of jeeps or sun-shades… The talk moved me. The guide and the group are not religious, but this brief conversation laid out before me the deep spirituality that links desert travel with the treasures of Jewish culture and spirit.

It’s sunset time – Asaf asks the group to spread out in front of the setting sun and appeals to everyone not to talk – just to observe. Silence. The sun begins to sink, painting the horizon red, winds begin to blow gently from the west, and the sun finally sets over the horizon. All the desert plants that have dried on the ground, are pulsating before me in gold. I have a sense that this is a one-off experience and I need to remind myself that this sunset takes place every day… but the way it has captured my attention so completely, has caused the event to become so significant. After the sun goes down, Asaf breaks the silence and says, “Wishing us all a lot of simple moments that don’t cost much, but are worth a lot.”

From now on we’ll be heading north and east, along trails of camel herders and shepherds, until we reach a vantage point to see the moon rising in the west. The walk is fast, the light is fading, and the paths are now stretching between very steep slopes (you can see this part of the trip in the attached video).

After an hour of walking, darkness now prevails. Lights begin to turn on, on the east side of the Jordan River, and light up the area. We stop and Asaf explains about the special ‘dance’ between the Sun, the Moon and the Earth, that creates the transformation of the moon, the times of the moon’s rising, and the way of calculating how long the moon appears above the horizon. The explanations are enlightening and there is a sense of a strong mathematical understanding. Asaf explains that, before he entered the field of tour-guiding in the desert, he was an engineer. Now things become a little clearer. Omer is ready with the coffee and we just have to stay and wait for the moon.

After the explanation, we find ourselves once again gazing in silence at the black horizon of the Jordanian mountains. Within a minute, the moon begins to rise above the mountains. Again, as when watching the sunset, there’s an unusual feeling that a rare and special event is unfolding. Within a few more minutes, the moon is shining in its entirety. Someone in the group whispers, “And to think that now, most people are watching some TV series or other, or just staring at a screen”, and I feel that I’m in the best place a human being can be in, at that minute. We continue walking and start descending towards Nahal Tor – on the way we stop by a tiny tent of Bedouin shepherds, made of coarsely stitched cloth sacks. Asaf explains to the group how Bedouin shepherds control their herds of camels and sheep – in fact, the stream system in the area becomes a kind of huge, fence-less compound for all these herds and, meanwhile, in such simple tents, the shepherds sleep and live for long periods of time. Meeting at the tent is not just coincidental… Asaf tells me that “the deeper meaning is the content and how it meets the experience. I believe that meeting the culture of Bedouin shepherds who live so simply, changes people. It does something to them – in the heart”, he said. From the reaction of the group members it seems that, indeed, something has changed. We continue to walk under the full moon that illuminates us and the bare hills around us, and make a final stop before proceeding to the area where we will prepare dinner. Silence, with only winds blowing above us. We sit in a scattered formation. In honor of Tu B’av (the Holiday of Love), Omer reads a short passage by Hermann Hesse, which links the Love experience and the Fiancé, with walking. Asaf asks each member of the group to say one word that describes what they feel – and they come, one after the other, at varying intervals – “fire”, “calmness”, “freedom”, “serenity”, “genesis”, “tenderness”, “warmth”, “presence”, “quietness”, “happiness”.

A desert dinner fit for kings, and conclusion

We breathe in a little more of all this beauty and move on to the dinner preparation point. As far as Asaf and Omer are concerned, the point of the meal is very important and they pass it on to the participants – “do everything modestly, not like a bonfire on Lag B’omer” (Jewish festival on which large bonfires are lit all over the country). Asaf instructs the participants to collect dry branches of ‘Rotem’ (a flowering desert plant). He ensures that the bonfires are not always made in the same places, so that when each group leaves the area, there will be no trace of them having been there. The group divides into subgroups and everyone takes part in preparing the meal – some make the campfire, some make dough for pita-bread and sambousak, others make salad and tahini. An hour later the food is ready, and on Nature’s table of stones and sand, the samboukas and pitas, baked on-site, are served alongside salad, tahini, and labaneh. Who would have thought that such a kingly desert repast could be created by the power of cooperation, in such a short time?

After dinner, we pack up ready to leave, but only after making sure to cover the remains of the campfires and take with us every single trace attesting to our presence. It’s almost midnight – just before we head back to the desert jeep trail – the path on which we’ll walk back to “Metzoke Dragot”. The group gathers for the last time. We collect our thoughts and impressions, all with the feeling that something extraordinary has taken place here – especially because of the simplicity and modesty of the desert. And in Asaf’s words, “We can live in a simpler way, we don’t need productions.” 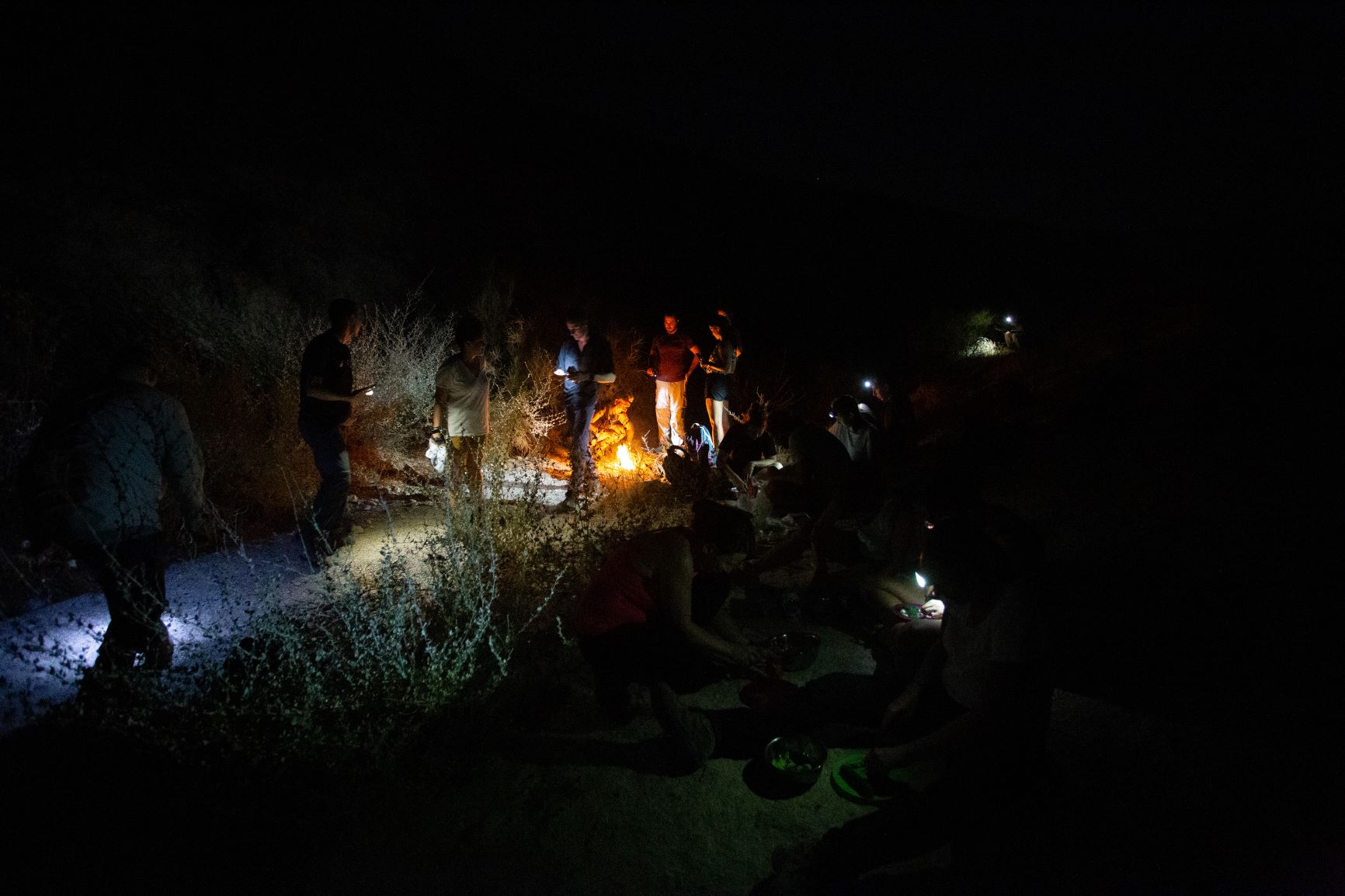 We arrive at the vehicles late at night – you can stay overnight at “Metzoke Dragot”, or at the “Tent Opening” in nearby Ovnat, or drive back home.

So, if you liked this, you can already sign up for the Full Moon trips that will take place next month…

For accommodation at the end of the trip at “Metzoke Dragot”

Descension to a Vacation

The Amiaz Plateau at Full Moon Photograph: Eyal Ben Leah When I sat down to write about
27/05/2020

5 Wet-Walks for the Shavuot Holiday

Of all the Shavuot traditions, the ones I practice most meticulously are the water festivities.
21/06/2020

Yesterday my grandfather called me and said excitedly, "It's time to develop and encourage mass
21/06/2020

Recently, a lot of conspiracy theories have been floating around…  I guess the excess free time
On the map